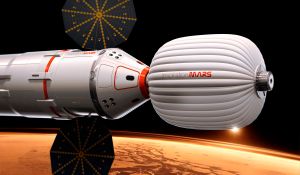 Customers aren’t reasonable – and our customer strategies shouldn’t be either.

Dennis Tito (the man who paid $20m as the first tourist in space) has announced he wants to send a flight to Mars by 2018.  He doesn’t yet have the money, the spaceship or the crew. But if he succeeds, he hopes to inspire the World into thinking differently about our place in the Universe.

Is it realistic? Probably not – but I wouldn’t bet against him succeeding, and I would love it if he did.

If you work in a city, look around.  See the tall buildings, the shops, the underpasses? Each was once a dream.  Each began only when someone said, “What if we….?”

And each became real only when this someone ignored the toxic voices which said, “Yes, but….” or “With the greatest respect…”  or (the most lethal of all, because it sounds so very sensible) “Let’s be realistic…”

But ignore them they did. And, instead, they built the bridges, and the skyscrapers, and the health service, and Apple and Facebook and all the other, unrealistic, unreasonable things that define the twenty-first century.

No, let’s not be realistic.

Lets be unreasonable instead.

If they want a product, they don’t care about our immensely complicated supply chain. They want it – now.

If they have a problem, they don’t want  it fixed within “..the contractual response time” as per the Service Level Agreement (SLA).  They want it fixed – now.

(More importantly, they don’t want it fixed, they want it never to have happened in the first place).

And they don’t care that our lines are very busy and that their call is “very important” to us. They want to talk to someone – now.

…And if we can’t do these things, they’ll find someone who can.

Are these expectations reasonable? Not a chance.

But do customers care? No.

So let’s not have reasonable standards for customer strategy and service.  Lets aspire to the unreasonable.

How about an unreasonable customer cycle time? Cycle time – the time the customer experiences when we do anything which affects them: from when the customer first becomes aware of us, through to when we supply our products, from their paying us or our providing customer service.

Why not aim to have a cycle time of zero?

Why zero? Why not? Wouldn’t it be fantastic?

Customers get everything they want, straightaway.  Our costs plummet because our supply chain is instant.  Our service is better because we can respond immediately. Our people are happier because fewer things get between them and giving the customer what they want. And our competitors are left in the dust.

Is this reasonable? God knows.

Is it desirable? Hell, yes.

Is it attainable? We’ll never know unless we try.

Because it is only by aiming for the unreasonable that breakthroughs happen. It is only by being unrealistic that we genuinely force innovation and creativity. And it is in this space – the “are you mad…?” space – that you can inspire greatness.

So let’s not be at home to Mr Reasonable.

Fresh thinking about the customer