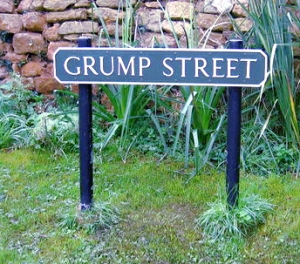 Beware of the Grumps

When we want to change anything in an organisation, we will meet the Grumps. Grumps are colleagues who appear to support the project (and who may actually believe that they are acting in the project’s best interests) but whose presence is toxic to success.

The most telling sign that someone is a Grump is to note their effect on the energy of others.

If their presence adds to the energy of the team – if they are ‘radiators’* – then they are probably not Grumps.

If, however, their presence sucks the energy from the room – if they are ‘drains’ – we need to be careful.

How they speak is often a giveaway. Grumps are people on the ground who reveal themselves in meetings and emails and water-cooler conversations when they say things like:

“…We’ve tried this already and…”

Or (as I have genuinely heard in more than one company):

“…we have to be careful not to trust customers too much…”

…and similar statements which have the facade of reason but really reflect fundamental antipathy.

They raise seemingly legitimate objections which are never about the intent of the project, always about the implementation.  Before long, the team is spending more time and energy managing concerns raised by Grumps and less in delivering the project.  Slowly, imperceptibly, Grumps force us to move our focus away from making things better for customers to trying to keep the Grumps happy.

And so the project fails – or more typically, fades away, as the effort needed to deliver something good gets brought down by the drag of managing the Grumps.

How to beat the Grumps

These three steps can help us beat the Grumps:

Good customer experience projects are all about leverage. They seek the places and strategies which yield maximum results in the fastest time. Grumps kill leverage, by forcing us to consider their objections instead of the customers, slow us down by distracting our attention and diverting our resources, and kill our projects by slowly sucking out our energy and momentum.

But if we can identify Grumps early and adopt the right practical strategies to prevent the damage they can cause, we remove one of the biggest barriers to customer experience project success.

Have you had the misfortune of working with Grumps?  What Grump warning signs have you seen? Let us know in the comments below.

*The idea of ‘Radiators’ and ‘Drains’ comes from Julian Fellowes in his book, Past Imperfect. I came across it cited in an article in Gretchen Rubin‘s blog, The Happiness Project.

**’Getting them off the bus’ is a CEO strategy recommended in Jim Collins’ excellent book, From Good to Great (p.56)

2 thoughts on “How to do customer experience: 3 ways to beat the grumps”

Fresh thinking about the customer